Amber Athwal is a young girl in Edmonton, Alberta who has suffered permanent brain injury due to improper dental sedation.

Prior to this incident the Alberta Health Minister -Sarah Hoffman- was warned protocols in Alberta were below the highest standards:

About six months later Amber was in recovery following a dental procedure and the nurse removed her monitors and left her unattended. She stopped breathing. The office discovered the problem, panicked and ran next door to get help from a dental professional who knew what to do.

This second dentist reported the incident to the ADA&C Complaint Director.

The CD, Colleen Wetter is a lawyer with no formal dental or medical background. She assigns a dentist with no sedation training to look into the sedation incident. Mather's office continues to see patients- including children. More patients are put at risk- for 2-3 weeks before Ms. Wetter decides to close the facility.

The ADA&C first responds that they will NOT be changing the sedation protocols. Ms. Wetter tells Amber's father that she does not need to answer his questions. About 4-6 weeks later the ADA&C decides to ban single operator sedation (even though this was not the cause of the incident).

The investigation finally gets assigned to someone with sedation knowledge. Nobody looks at the questionable handling of the alert by the Complaints Director.

They assign a former ADA&C president to chair the sedation review committee.

They assign another former ADA&C president to chair the tribunal (jury).

Neither bothers to look at the missteps of the ADA&C Complaint Director and issues with previous inspections which uncovered the recovery nurses lack of qualifications and Mather's failure to perform mock drills. They also failed to address advertising of 'dental anesthesiologists' involved - a recognized specialty in Ontario but not Alberta.

Could recognizing the specialty have forced these professionals all the be current in their training? This was not considered in the official report.

Everything focused on the child's milk and bread she had at breakfast before the sedation. This violation of protocols was NOT found to be responsible for the incident. No evidence of aspiration of stomach contents was discovered.

Now some studies question the strict guidelines about fluids prior to sedation:

Current nil per os (npo) standards promote pre-operative fasting as an approach to reduce the volume and acidity of a patient’s stomach contents to reduce the risks of regurgitation and subsequent pulmonary aspiration. Pre-anesthesia fasting standards apply to any procedure where sedative medications reduce the protective airway reflex that under normal conditions prevent aspiration. The scientific basis for fasting standards are largely reliant on theories of anatomy and physiology and rooted in consensus of expert opinions with limited evidence to support improved clinical outcomes.

Pre-operative fasting standards have been developed by anesthesia societies with almost all following a variant of the “2-4-6-8 rule”. The American Society of Anesthesiologists (ASA) recommends patients to fast from fatty food or meats eight (8) hours prior to surgery, non-human milk or light meal for six (6) hours prior, breast milk for four (4) hours prior, and clear liquids including water, pulp-free juice, and tea or coffee without milk for two (2) hours prior to the anesthetic.1 In Canada, the Canadian Anesthesiologists’ Society’s guidelines are very similar to the ASA guidelines, however, the Canadian Pediatric Anesthesia Society fasting guidelines now encourages children to have clear liquids up to one hour prior to surgery.2,3 The European Society of Anaesthesiology (ESA) pre-operative fasting guideline prohibits solid foods for six hours prior to elective surgery and encourages patients to drink clear fluids up to two hours for adults and one hour for children.4 The concern is that the standards may be too rigid and contribute to patient harm or poor anesthetic outcomes.

Recent research into pre-operative fasting suggests that prolonged fluid fasting can lead to undesirable outcomes such anxiety, dehydration and post-operative nausea and vomiting.5 Likewise, prolonged fasting has resulted in cases of hypoglycemia and hypovolemia, more frequently seen in children.2,5 To improve our understanding of pre-operative fluid management, research has been undertaken to understand if the current fasting standards are actually beneficial for protecting patients from detrimental clinical outcomes.6
--

It is doubtful the sedation review committee will consider the ADA&C response, the most current concepts or even try to set a universal standard across provinces. They may not have included representatives from all groups that offer dental sedation to favor that used by the chair of the committee. Turf wars limit options.

CPR is the same across Canada. Dental sedation protocols seem to be revised province by province only AFTER a serious incident.

Alberta's dental authority did not revise the sedation rules until after Amber's tragedy.

BC's dental investigation costs were about $60,000 compared to Alberta's $330,000 plus. The costs of investigations have sky-rocketed under Colleen Wetter's control of the ADA&C as shown in this book comparing costs:

The quality of the investigation seems to have no relationship to the money invested. The ADA&C's official report failed to consider many issues raised here. The ADA&C wanted to take any focus away from it's own involvement and avoided transparency of all factors.

To recap the Amber Athwal sedation case and the Alberta dental authority:

1) Did not immediately close the Mather office.
2) Did not assign an initial investigator with sedation qualifications.
3) Did not look at what they ADA&C response failures were.
4) Did not assign an unbiased lead tribunal member - a former ADA&C president is a tactic they use over and over.
5) Did not look at the reason the nurse's lack of qualifications discovered 6 months prior to the incident in an inspection did not sound alarm bells.
6) Did not consider how selecting another former ADA&C president to lead the sedation review committee could be a concern.

It is quite possible the victim's father will be asking questions and asking for an independent review that will possibly suggest Ms. Wetter's legal qualifications fall short in guarding the public from medico-dental risks. Possibly other parents could sue for allowing their children to be treating in substandard conditions.

The former administration's wisdom in her selection may have involved being able to use her to direct selective attacks -an abuse of power. The current administration chose to award people who used cronyism and bullying (possibly witness tampering and intimidation)- and conflicts of interest - instead of opening investigations into these suspect activities.

The Health Ministers of Alberta (three so far) have been asked to consider requesting an independent review of the ADA&C with respect to the issues raised.

A FREE book that reviews the official report may be found through the link below: 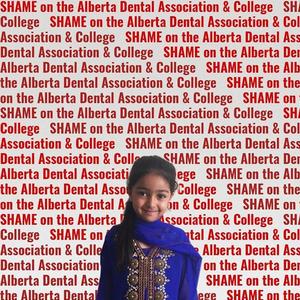